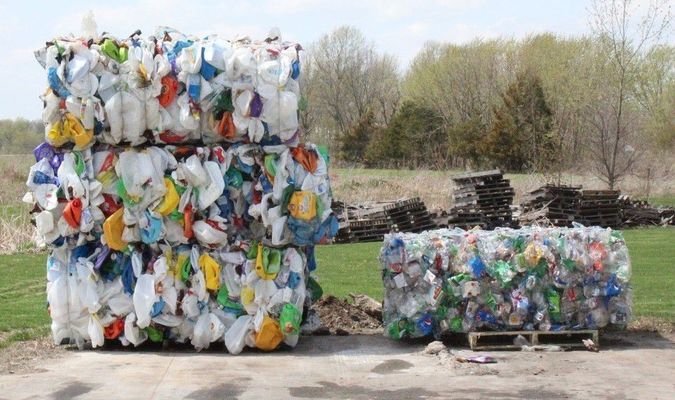 The Monroe City Sheltered Workshop, located at 701 South East Border Street, Monroe City, Missouri, is no longer acepting plastic or flat cardboard. Since the first week in April, Sheltered Workshop has also stopped curbside services, which has residents concerned. Connie Thurman, of the Monroe City Sheltered Workshop, cites several issues that informed the Workshop’s decision to cut its services.
“We stopped curbside the first week in April partly because it just wasn’t paying us to drive around town for the recycling, and many people left cereal boxes and things like that, and we can’t even give those away,” said Thurman. “They’re just not worth anything at all, so it costs us to get rid of them.” Sheltered Workshop now accepts corrugated cardboard almost exclusively, as flat cardboard partly contributes to the center’s average $550 garbage bill. However, mills currently accepting Monroe City Sheltered Workshop’s corrugated cardboard are packed full. A surplus of the commodity has lowered its price from $200 to only $45 a ton.
The center previously accepted plastic items with resin codes #1, #2, #3, which usually have a screw top lid, but is no longer accepting any plastic types at all. Because the Sheltered Workshop sorted the plastics it received, which adds to the worth of each plastic bale, Thurman says the center “paid out a lot in labor. It just got to the point where we couldn’t absorb all that expense and keep on going.” If the center combined its plastics, as some recycling centers do, Thurman says each bail automatically decreases it worth, which would make little profit for the center. The center has taken six months to make a final load which only comes out to $2000 total when delivered.
On the Shelter’s Facebook page, a March 27th post shows pictures of the waste residents have dropped off in Trailers, almost all of which Thurman says is nonrecyclable. “Nobody seems to care,” said Thurman. “When we have to go through used cat litter, dirty diapers, or just coffee grounds—people throw in whatever they want to—that’s considered trash. I don’t know how you convince people what to do.” Thurman and her staff have visited various organizations and groups in Paris, Shelbina, Shelbyville, and Bethel, and especially Monroe City. “We go to explain ‘this is what we take,’ and it just doesn’t go anywhere.”
“I understand that people are upset because they can’t get rid of their plastic, but they also have to understand that we can’t continue,” said Thurman. “I don’t think there’s anybody who is going to keep a business if they are going to lose money and we are a business like anybody else. Even though we’re not for profit, we’re still a business, so we have to be careful. We still have to pay our employees and the bills.”

Over 95 Sheltered Workshops are currently in the state of Missouri and, with several operating as recycling programs, they struggle with similar issues to the Monroe City Sheltered Workshop. Neighboring facility Macon Diversified Industries, INC, now only accepts #1 and #2 plastics. 2 Rivers industries recently gave a public notice that #3, #4, #5, #6, and #7 plastics will no longer be accepted as well as clothing, belts, purses, soft toys, and shoes.
Monroe City Sheltered Workshop is continuing to except aluminum, metal, paper, books, and magazines.

Quincy Recycling receives several of the Workshop’s materials, including plastic. “Volume, is what they want and we have trouble with that,” said Thurman, highlighting another problem the facility faces: size. “We don’t have a place to store certain items such as different kinds of plastics, and there are 40 some odd bales that go on a trailer. They weigh close to 1,000 pounds, and we have no way of storing all that stuff. We’re just so small that we can’t compete.”

“We hate it just as much as anybody else does,” Thurman said in closing her remarks. “We started with the intention of at least breaking even, and it just hasn’t happened. I don’t think people realize that until they talk to us about what we do and how this all works.”