Hero of the Month - David Hoffman 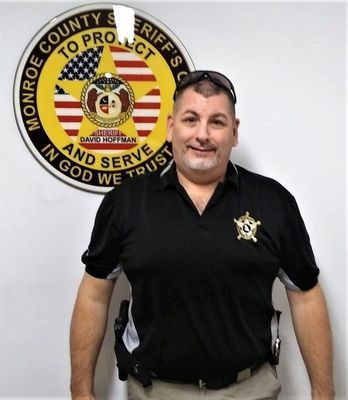 The Monroe County Appeal has started a new section to spotlight those Hero’s in our community. January’s Hero of the Month is our very own, Monroe County Sheriff, David Hoffman.

David grew up in a small town on the county border in Tulip, Mo. After his family sold their farm, they moved to Clarence, Mo and David graduated from South Shelby High School in 1986. After graduating high school, David wanted to be a MP, but, he wasn’t 18 years old yet, so he had to make a different decision, which was an easy one.

“I looked up at the wall, saw a picture of a tanker, and of course being 17, I didn’t think things through, and picked that position,” said David.

David served in the United States Army for four years, where he served active duty in the first Golf War or otherwise known as Operation Desert Storm.

It’s come full circle for me by doing this interview, as when I was a student at Holliday C-2, I had written a letter to a local soldier who was oversees, thanking him for his service, and that soldier was David.

David said, “I’ve never had any family that was in Law Enforcement, however, I had friends who were highway patrolmen and that sparked my interest.

After returning home in 1991, David worked with the Shelbina Police Department under Sergeant Barr for one year. (This was when it was a requirement to have a year of street experience before going into the academy)

In 1992 David started working in Monroe County as a Deputy and in September 1992, David completed his necessary 120 hours from the Law Enforcement Academy.

“I continued to work in Monroe County and in 1994 I attended the Advanced 200 Class,” said David.

After the 2008 Election, Sheriff Gary Tawney stepped down for David to take over the rest of his term in November 2008 and David would start his elected position as Sheriff in January 2009 where he continues to serve Monroe County as Sheriff.

David met his now wife, Heather, who was an EMT at the time, while he was a Deputy. They married on September 2, 2000 and have three daughters; Kelse, Alex, and Jessie. The Hoffman’s live south of Paris.

I asked David in our conversation, what was the most memorable experience in his career; David responded by saying, “Helping people and seeing smiles on their faces.”

“I’ve had the pleasure to work with a lot of fine people, great prosecutors, and judges. I’ve had great cases as well. It’s very satisfying to know I help keep the children in the county safe and know that my children are safe as well,” said David.