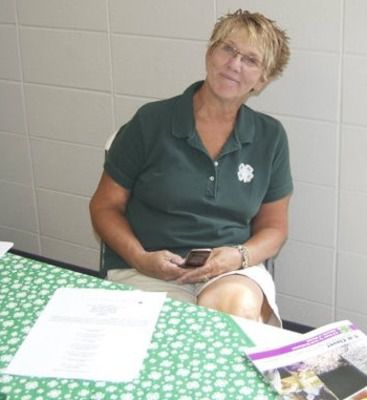 A very special project is showing a light at the end of the long tunnel, finally, Jacquie’s Barn is becoming a reality.

Jacquie’s Barn project is a project that started back in 2012 when the Monroe County 4-H youth advisor, Jacquie Stuart, passed away after a short battle with pancreatic cancer. A committee was formed to raise money to construct a ‘Show Barn’ in her memory. It has been a long time getting here but the effort has been worth it.

Kim Mitchell said, “This project is near and dear to my heart, and Jacquie was a best friend to me, several others, our youth, and our 4-H program!! She had the ability to motivate our youth to live by the 4-H motto-‘To make the best better.’"

Stuart was the YPA (youth program assistant) in Monroe County for 15 years. She was also a project leader and club leader for the Mark Twain 4-H club prior to working for the Extension Office.

In November of 2011, Stuart was dealt a devastating diagnosis of pancreatic cancer. Two months later, she lost her battle to the disease. Upon finding out her diagnosis, Stuart was braver than anyone. Her words were- and I quote: "Don't send any flowers to my funeral, build my kids a barn!" Mitchell, along with several others, made her that promise, and although the road has been slower than we would have liked, construction will start September 15th.

The initial phase will be a 60'x 80' pole barn structure on the west side of the horse arena.

The goal is to have a finished barn that is 60' x 120' with the ability to be utilized by 4-H, FFA, and the community. The bleachers and announcer stand will be movable and the barn will be able to be rearranged to suit a variety of needs.

This project could not have been possible without the support of Stuart’s family and the community- the numerous fundraisers and donations have made the start of this project possible.

Joe Crain is the chair of Jacquie's Barn Committee, Nancy Wilkerson, Mary Beth Mitchell, and Kim Mitchell all serve on the planning committee.

There is also a group of Stuart’s camping buddies that formed "Jacquie's Crew" and put on the Paris Halloween Walk every year in Jacquie's memory. This started in 2013 (I believe the year the government shutdown caused the Indian Creek Halloween Walk not to occur) and continues yearly to raise funds towards the Barn.

One of Stuart’s favorite sayings was "It's all about the kids". The community continue on that mission and continue to strive to make a great 4-H leader proud!

Jacquie’s Barn is going to be constructed at the City Park, the final approval has been given from the Board of Aldermen during the Tuesday night’s City Board Meeting, August 7.